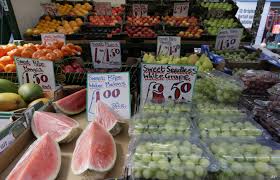 The UK food industry has asked the government to waive aspects of competition law to allow firms to co-ordinate and direct supplies with each other after a no-deal Brexit.

The Food and Drink Federation (FDF) said it repeatedly asked ministers for clarity on a no-deal scenario.

The industry says leaving in the autumn could pose more supply problems than the original Brexit date last March.

The FDF, which represents a wide range of food companies and trade associations, said: “We asked for these reassurances at the end of last year. But we’re still waiting.”

The boss of one leading retailer told the BBC: “At the extreme, people like me and people from government will have to decide where lorries go to keep the food supply chain going. And in that scenario we’d have to work with competitors, and the government would have to suspend competition laws.”

“It may be the government is going to come to us and say, ‘can’t you guys work together to ensure that remote communities or the elderly or children – at risk groups – don’t suffer from these shortages’,”

“We’re happy to help, but the CMA can fine companies up to 10% of turnover if they are guilty of anti-competitive behaviour. So we wouldn’t be able to do that without some pretty cast iron reassurances.”

He said the industry had asked for these reassurances at the end of last year, but despite “support” from the Department for Environment, Food and Rural Affairs, they were still waiting.

A government spokesman said: “The UK will be leaving the EU on 31 October and our top priority is supporting consumers and businesses in their preparations for Brexit.

“We are working closely with the food industry to support preparations as we leave the EU.”

There is a precedent for the government or competition authorities to act in this way, with the government pointing to four previous examples of such orders having been made – three in relation to the defence industry (one of which was subsequently repealed), and a fourth made regarding arrangements for the supply of oil and petroleum products.

“The last time something like this happened was in relation to dairy prices in 2001 when companies incorrectly thought government words about higher prices for dairy farmers would protect them from competition law. It did not.”

John Fingleton, the former head of the Office for Fair Trading, warned

As a consequence, supermarkets faced huge fines for price fixing.

Which industries could suffer from a no-deal Brexit?

The cross-party Exiting the EU Committee has warned that a no deal could mean “damaging consequences” for sectors such as:

It comes after Domino’s Pizza Group said it had spent £7m stockpiling ingredients, including tomato sauce, in case a no-deal Brexit disrupts supplies.

The company, which imports the tomato sauce for its pizza bases from Portugal, said the probability of shortages of ingredients had increased since March.

The FDF said it has repeatedly asked government to direct the CMA to issue a “letter of comfort” to the industry that such co-ordination would be considered legal, in the public interest and that the strict letter of the law would not be enforced in this situation.

The industry claims that the government, in internal discussions, has played down the impact a no-deal Brexit would have on the overall food supply.

One industry member said that a year ago: “Food was part of the conversation in terms of what to prioritise in a no-deal Brexit”.

That has changed with the government now privately acknowledging there may be an impact on price and choice rather than overall availability.

The change in date for the UK to leave the European Union from the end of March to the end of October is also causing problems for the food industry as it relies more heavily on Europe for fresh food at this time of year.

There is also a lack of warehouse space available for stockpiling.

One retailer said that 31 October “is about the worst day you can pick,” because warehouse capacity is at 105% in November, versus 75-80% in March.

They said that the UK would need 30 massive empty warehouses to store just a week’s extra food supply.

Tthe government spokesman mentioned that: “Half of the food we eat is produced in the UK. The rest of our food is imported, with 30% coming from the EU and 20% from other countries. There will not be an overall shortage of food in the UK after we leave the EU.”