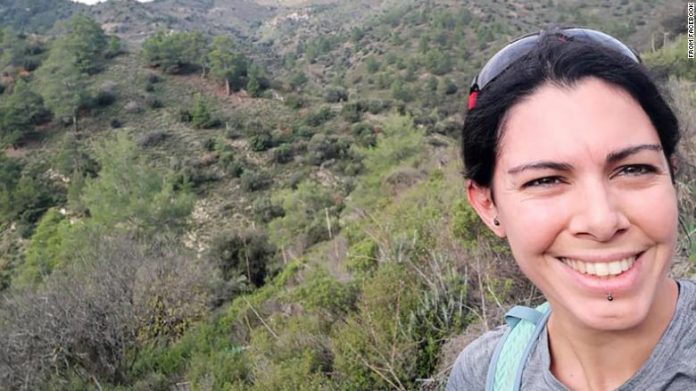 The disappearance of a British-Cypriot woman who was last seen Monday going for a run on a Greek island has prompted a massive search, police said.

Natalie Christopher, 34, an astrophysicist who lives in Cyprus, was first reported missing by her 38-year-old partner, with whom she had been vacationing on the Greek island of Ikaria, reporters say.

She left him a note saying she was going for a run, but failed to return, he said. The couple were planning to return home to Cyprus that evening.

Police officials told the news reporters that “the woman’s phone is now switched off.”

Vassilis Theodorakis, the owner of the Blue SeaSide Studios hotel where the couple were staying, said authorities have extensively searched two possible running routes in the area.

“We are investigating every possibility, every scenario,” police spokesman Theodoros Chronopoulos told reporters. “At this stage, we’re not ruling out anything.”

Christopher’s Facebook account indicates she is active in hiking, running, and mountain racing. An Oxford graduate, she is a researcher at the European University Cyprus.

“One leading to a beach that is accessible by car and an easy path for an experienced runner as the lady was said to be. The other path leads towards a mountain village and has some difficult points,” Theodorakis said. Christopher’s Facebook page includes photos showing her running in various locations.

She is not the first person to disappear in Greece

Christopher’s case comes on the heels the death of American scientist Suzanne Eaton, whose body was found in an abandoned World War II bunker on the Greek island of Crete last month.

Eaton, a 59-year-old molecular biologist at the Max Planck Institute in Dresden, Germany, had been on the island for a conference and disappeared while out for a run.

A 27-year-old local man has been charged with rape and murder in Eaton’s death.