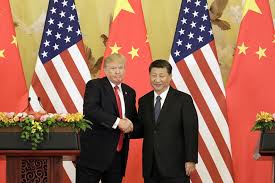 The United States has escalated its trade war with China, hiking tariffs on $200 billion worth of Chinese exports hours after trade talks held in Washington failed to produce a breakthrough.

Tariffs on the targeted exports increased from 10% to 25% at 12:01 a.m. ET on Friday, prompting a swift rebuke from Beijing.

The Chinese government expressed “deep regret over the development” and pledged to take “necessary countermeasures.”

“We hope the United States will meet us halfway, and work with us to resolve existing issues through cooperation and consultation,” China’s Ministry of Commerce said in a statement. The ministry did not give specifics on how it would respond.

As U.S.-China Trade war seems to worsen, investor are still betting on a deal

The trade war doesn’t seem to be a problem, as global markets largely rose on Friday just hours after President Trump escalated his trade war with China. The stock market in China, which sometimes gets a lift from state-run companies looking to buoy the market, led the global rise.

Futures that allow investors to bet on the performance of stocks in the United States indicated many believed Wall Street would open higher on Friday morning.

Early Friday, Mr. Trump raised tariffs to 25% from 10% on Chinese imports that are worth about $200 billion a year. He said the increase came in response to Chinese officials attempting to “renegotiate” a pact aimed at calling a trade war truce. China said it would respond with unspecified countermeasures.

Still, many investors believe the two sides can reach a deal, especially since the Trump administration effectively delayed the full brunt of the tariff increase. The Trump administration specified that it will collect the tariffs only on goods that leave China starting on Friday. That means they would not hit Chinese goods already on ships destined for the United States, though they would more immediately impact goods that are flown in.

“Our base case remains that the U.S. and China will eventually reach some kind of accord,” Mark Haefele, global chief investment officer for the Swiss bank UBS, said in a research note. “Both the U.S. and China have strong incentives to reach a deal and we do not expect a complete breakdown in negotiations.”

In Japan, the Nikkei 225 index fell 0.3% after disappointing wage data there.

European markets opened modestly higher. In Germany, the DAX index was up 1%.