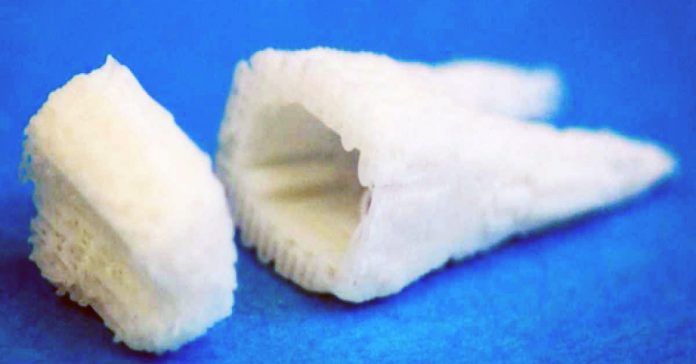 Tooth loss is an issue that most people will face at some point in their lifetime, and according to Underground Health Reporter, by age 74 – 26% of adults have lost all of their permanent teeth. Dentures have their fair share of issues, they’re uncomfortable and dental implants can fail and have no ability to “remodel” as the surrounding jaw bone changes with age.

All of these are reasons that people have so much hope in stem cell research. While some controversy surrounds the new medical method, for the use and destruction of human embryos, not all research involves human tissue and it could change a lot of lives.

A new technique pioneered in the Tissue Engineering and Regenerative Medicine Laboratory of Dr. Jeremy Mao, Edward V. Zegarelli Professor of Dental Medicine, and a professor of biomedical engineering at Columbia University, could make tooth loss a thing of the past.

The group believe that they’ve found a way to have the body’s stem cells migrate to a three-dimensional scaffold made of natural material and placed in a patient’s mouth. Once the stem cells have colonized the scaffold, a tooth can grow in the socket and then merge with the surrounding tissue. Essentially, they believe that they could build a tooth much like you build a structure, but with your body proving the bricks. The result? A new anatomically correct tooth in as little as nine weeks.

The results were published in the Journal of Dental Research (JADA), a top publication in the field of dentistry in 2010. The experiment is explained as follows:

“In each of 22 rats, they implanted an incisor scaffold orthotopically in mandibular incisor extraction pockets and a human molar scaffold ectopically in the dorsum. They then infused the scaffolds’ microchannels with two growth factors. They also implanted growth-factor–free control scaffolds.“

An example of a “scaffold” that could be used to grow a human molar.

“These findings represent the first report of regeneration of anatomically shaped tooth-like structures in vivo,  and by cell homing without cell delivery,” Dr. Mao told JADA.

“The potency of cell homing is substantiated not only by cell recruitment into scaffold microchannels, but also by regeneration of a putative periodontal ligaments newly formed alveolar bone.”

Dentistry IQ explains that dental implants are the best it gets at replacing teeth currently. They consist of a cone-shaped titanium screw with a roughened or smooth surface and are placed in the jaw bone. The problem with dental implants? Healing times vary widely from person to person, and require trips to multiple professionals, taking about 18 months in all.

“Although dental implants are available, the healing process can take months on end, and implants that fail to align with the ever-growing jawbone tend to fall out.”

“A key consideration in tooth regeneration is finding a cost-effective approach that can translate into therapies for patients who cannot afford or who aren’t good candidates for dental implants,” Dr. Mao said. “Cell-homing-based tooth regeneration may provide a tangible pathway toward clinical translation.”

The research removes the previous need to grow teeth in a petri dish, which uses stem cells from other sources, and could lead to faster recovery time and a tooth that’s far less likely to drop out.

Columbia University has already filed patent applications in regard to the technology, so we could all be getting a new set of pearly whites very soon.