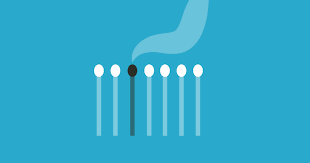 Workplace ‘burn-out’ has become a topic for scientific debate over the past years due to the fact that fatigue is truly a real workplace issue. In consequence, within the agency’s widely-used manual, known as the International Classification of Diseases (ICD), burn-out will be officially listed: not as a medical condition (as some initial reports have wrongfully stated), but instead as an ‘occupational syndrome’.

Although the changes that have been made seem insignificant, experts say that these updates will add legitimacy to an emerging and misunderstood  problem.

Included for the first time in the ICD’s tenth edition, burn-out was initially explained as a “state of vital exhaustion“. The international agency’s new definition is a little more fleshed-out.

Drawing on a growing body of research, the eleventh edition now claims that this syndrome is due solely to “chronic workplace stress” and “should not be applied to describe experiences in other areas of life.”

The modern ailment is chaptered-up with several other “problems associated with employment” that are not technically considered illnesses, but can nevertheless have serious medical repercussions.

Updates on how the WHO evaluates the Burnout syndrome

Here’s how the WHO characterises burnout: “feelings of energy depletion or exhaustion; increased mental distance from one’s job, or feelings of negativism or cynicism related to one’s job; and reduced professional efficacy.”

Evaluating the burnout syndrome isn’t an easy task given that its parameters aren’t clear at all and these new international standards could greatly improve diagnosis and treatment. Currently, there is no neat or universal way to tease out symptoms of burnout from symptoms of other mental health conditions, such as depression.

On a global scale, this makes it extremely difficult for doctors to recognise the syndrome, let alone treat it, and in some professions it’s causing an epidemic.

A UK survey, for instance, found that nearly 30% of human resource directors thought burnout was widespread in their organisation; while a recent report from Harvard declared physician burnout in the US a public health crisis This health crisis could have the economical effect of losing $4.6 billion a year.

Within certain people-oriented professions, the norm is to be selfless and work for others, but it isn’t long before the demands of altruism take their toll.

Burnout symptoms that shouldn’t be overlooked

Even if the issue may be seen as a superficial problem, burnout has nothing to do with laziness. WHO’s own research suggests that burn-out occurs when the demands of a job far outweigh the rewards, recognition, and times of relaxation.

As a result, workers who are burned out often feel like their ambitions, idealism, and sense of worth are slowly being strangled. The losses from this syndrome are not simply financial, and they could have a large impact on public health.

Some research has shown that the profound emotional exhaustion and negativity brought on by burnout can actually change a worker’s brain, making it harder for them to deal with stress in the future. Neuroimaging studies have even found similarities between the brains of those who suffer from early-life trauma and those who deal with clinical burn-out in adulthood.

The psychological effects from burnout include such doozies as insomnia, depression, use of psychotropic and antidepressant medications, hospitalisation for mental disorders and psychological ill-health symptoms.