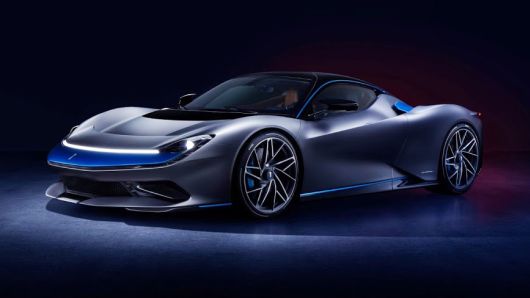 While other automakers packed the Javits Center for the New York International Auto Show, Automobili Pininfarina launched one of the week’s most exciting car debuts at an off-site event.

The company’s new all-electric Battista hypercar produces a whopping 1,900 horsepower and reaches 60 miles per hour in under two seconds. That makes it the fastest street-legal car ever built by an automaker, even outrunning a Formula One race car to 60 mph.

Pininfarina has previously said that a Battista will hit 180 mph in less time than an F-16 fighter jet. All of that thrust comes from electric motors that are fed by a 120 kWh battery and should be good for around 300 miles of range on a single charge.

The company – which has roots in the storied Italian design house that styled iconic cars like the Fiat 124, Maserati GranTurismo, Ferrari Testarossa and Alfa Romeo Spider – is targeting a 2020 release date for the Battista.

The company enters the all-electric hypercar fray at a competitive time with companies like Rimac and NIO rushing to market ultimate-performance EVs. More established brands are also pushing for performance electrics, as Tesla gears up to build the next Roadster and Porsche puts its Taycan on sale.

Automobili Pininfarina has secured U.S. retail partnerships with distributors in Los Angeles, Miami, New York and San Francisco. With just 50 of the 150 Battistas destined for the North American market and a $2.5 million price tag, the Battista is sure to be a rare sight. According to the company, over half of the cars slated for North America have been reserved.

The Battista was first shown during Monterey Car Week in a private showing. The company plans to return to Monterey this year to launch the “PF1,” which is supposedly Automobili Pininfarina’s upcoming electric luxury car.