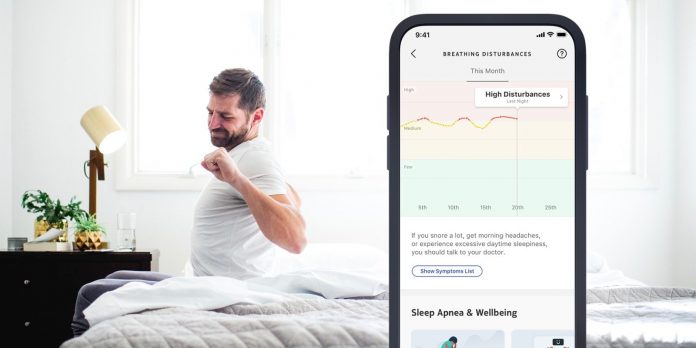 There are countless products available that help you track your sleep, giving you insights into your sleep patterns and quality. But there’s been nothing to help snoozers identify sleep apnea, a potentially-serious condition that could traditionally only be diagnosed by a sleep clinic. Now, health device maker Withings has released a new update to its sleep tracking mat that could help users recognize the symptoms of this disorder.

Withings says that a breathing disturbance can be any sign of troubled breathing that happens at night, which can be fairly common but goes unnoticed by most people. While these disturbances can be harmless, when they happen more frequent and become more intense, they have the chance to impair sleep quality and act as a sign of a chronic illness such as sleep apnea.

Each disturbance is then rated in the Health Mate app, from low to high, while providing monthly charts to see how your progression has been. The app also provides educational content so you can learn how these disturbances impact sleep, blood pressure, fitness, and weight, and seek proper medical care if needed.

Withings notes that these features are the “first step” towards launching a full sleep apnea detection update on Withings Sleep, planned for the end of 2019 and dependent upon FDA and CE clearances. According to Withings, the Withings Sleep is the first device to offer breathing disturbances detection on a non-intrusive in-home sleep tracking system.

“Despite its prevalence and serious consequences, sleep apnea goes largely undetected as current tests are confined to the clinical and sleep lab environment,” says Eric Carreel, President of Withings. “By allowing people to track the intensity of breathing disturbances, we are helping them identify warning signs early. This announcement is very important as it furthers our mission to bring medical grade analytics into the home and is the first step towards the medical certification of sleep apnea detection which we aim for by the end of this year.”

Withings Sleep is a direct competitor to the Apple-owned Beddit sleep monitor system, which is a flexible strip placed under a sheet on top of a mattress that tracks sleep time, heart rate, respiration, temperature, movement, and more.