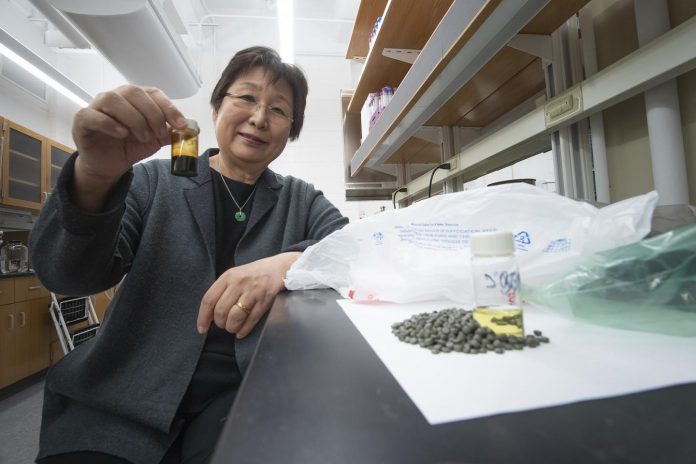 This new procedure could help convert the millions of tons of plastic waste that we generate each year into some gasoline and diesel-like fuel.

Millions of metric tons of plastic are produced each year and in reality, very little of it is recycled. But what if there were more ways of turning this waste into something valuable, such as new plastics or different types of fuel?

Scientists at Purdue University have taken a promising step towards attaining this aspiration by creating a new technology that can turn the majority of a commonly used plastic into the building blocks for all kinds of materials, something they hope can inspire new solutions for our plastic pollution problem.

The new technology represents a chemical conversion process which allows researchers to turn recycled shopping bags into pellets into oil as shown in the bottle being held by Linda Wang, the Maxine Spencer Nichols Professor in the Davidson School of Chemical Engineering. Using distillation, that oil is separated into a gasoline-like fuel in the bottle in the counter and a diesel-like fuel not shown.

What are the current fuel rules and what will the new procedure bring to the environment?

Waste plastic is choking the Earth’s oceans and poisoning its wildlife.

That’s why researchers at Purdue University are excited about a new chemical technique that turns waste plastic back into useful polymers and maybe even clean fuel.

How does this environmentally friendly process work?

The new technique works on polypropelene, according to a new paper published in the journal Sustainable Chemistry and Engineering, which is used to make everything from toys to snack food bags. The technique users super-heated water to convert the plastic into a gasoline-like fuel that could be used to fuel conventional vehicles.

“Our strategy is to create a driving force for recycling by converting polyolefin waste into a wide range of valuable products, including polymers, naphtha (a mixture of hydrocarbons), or clean fuels,” said Linda Wang, a researcher at Purdue University and leader of the research team behind the new technique, in a press release. “Our conversion technology has the potential to boost the profits of the recycling industry and shrink the world’s plastic waste stock.”

Polypropelene accounts for about 23% of the five billions of tons of plastic waste that’s been cast into landfills and the environment, according to the new research — meaning that if it could be turned into a valuable commodity, it’d create a huge incentive to recover and re-purpose it.

“Plastic waste disposal, whether recycled or thrown away, does not mean the end of the story,” Wang said. “These plastics degrade slowly and release toxic microplastics and chemicals into the land and the water. This is a catastrophe, because once these pollutants are in the oceans, they are impossible to retrieve completely.”

Wang became inspired to create this technology after reading about the plastic waste pollution of the oceans, ground water, and the environment. Of all the plastics produced over the past 65 years (8.3 billion tons), about 12% have been incinerated and only 9% have been recycled. The remaining 79% have gone into landfills or the oceans. The World Economic Forum predicts that by 2050 the oceans will hold more plastic waste than fish if the waste continues to be dumped into bodies of water.

Wang said the technology could convert up to 90% of the polyolefin plastic.

The obvious benefit of this new conversion process is cleaning up the environment by finding a use for plastic waste. But as Wang pointed out in a statement, the fact that the produced fuel can be sold for a profit will also encourage the recycling industry to rapidly adopt it.

Indeed, as Wang pointed out, time is essential when it comes to implementing effective recycling strategies. Every year that nothing is done, millions of tons of plastic flow into the oceans, where they are swallowed by wildlife and kill coral reefs. This plastic is notoriously hard to clean up and poses a mounting threat to entire ocean ecosystems, which can lead to cascading environmental crises across the globe.

It’s unclear how difficult it will be to implement this new plastic conversion process at scale, but at least for once it looks like there might actually be a “great future in plastics.”

And although the solution to clearing out waste disposal in an environmentally healthy way is far more complex than finding new ways of recycling the ubiquitous material, this certainly does represent a step in the right direction. Elsewhere, we have seen promising experimental technologies that can convert plastic bags into high-value carbon nanotubes, turn ocean plastics into usable diesel fuels and turn plastic bottles into other fuels and waxes.

Wang said she hopes her technology will stimulate the recycling industry to reduce the rapidly rising amount of plastic waste. She and her team are looking for investors or partners to assist with demonstrating this technology at a commercial scale.

Wang’s technology is patented through the Purdue Research Foundation’s Office of Technology Commercialization.