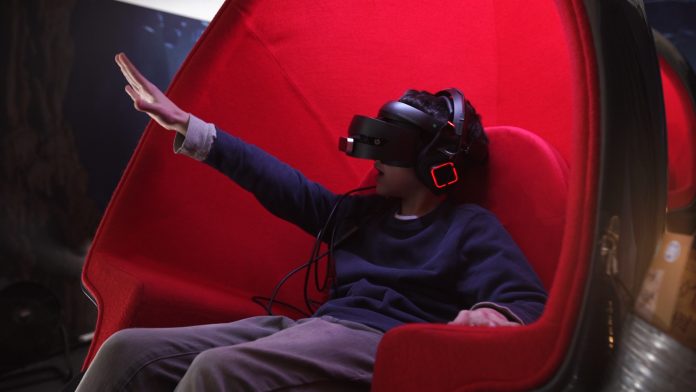 Walmart has a new sales strategy and it’s more fun than we could’ve imagined.

Walmart and DreamWorks Animations have teamed up to for a touring VR experience tied to “How to Train Your Dragon: The Hidden World.” Walmart is setting up installations in parking lots of its stores in 16 cities, starting Friday (Feb. 15) in Burbank and culminating in its hometown of Bentonville, Ark., on April 7-9.

This marks the official launch of Spatial&, a VR tech company that’s been growing in stealth mode for the past year under Walmart’s incubator Store No. 8.

Over the next few weeks, Walmart will be bringing 50-foot tractor-trailers to the parking lots of some of its stores to let customers experience DreamWorks Animation’s “How to Train Your Dragon” using virtual reality technology.

Wearing a VR headset and sitting in VR-powered chairs, users will be able to see and feel — and even smell — like they are in the DreamWorks film.

The experience, directed by Kurt Mattila and Gil Zimmerman and produced by Armand Weeresinghe, begins in an onboarding room where the film’s mischievous twins Ruffnut and Tuffnut greet guests, setting the scene for this magical adventure. Participants are then led into a dragon’s cave to suit up in headsets, and sit in specialized Positron motion VR chairs powered by the HP VR backpack, before embarking on a truly life-like five-minute journey through the breathtaking Hidden World with the help of Astrid, Hiccup, Toothless, Hookfang and more.

This remarkable activation gives everyone, ages 8 and up, the opportunity to interact with “How to Train Your Dragon” characters through immersive real-world sound, motion and sensory cues. Viewers are drawn fully into the experience physically and emotionally, creating deep bonds with the dragons and characters they encounter along the way.

The “Dragon” experience ends in a branded, immersive gift shop featuring merchandise from the film, ranging from plush toys and action figures to franchise DVDs and video games. Select items from the collection will be available at 2,000 Walmart stores nationwide.

This is just the first application by Walmart of Spatial&, a VR tech company that’s been growing in stealth mode for the past year under Walmart’s incubator Store No. 8. Spatial& is notably the second company officially launched out of Store No. 8, after Jetblack, a text-to-order service currently being tested in New York.

Walmart has big plans for VR. To date, it’s been using VR headsets in its training academies for employees to let them experience what it might be like to work a busy Black Friday shift in Walmart stores, for example. With Spatial&, the company could bring more VR into stores for shoppers to experience for themselves.

Finnegan said the VR trailers can work in many ways, giving shoppers an immersive experience where they can test out camping gear, for example, or visit the vineyard where Walmart’s wine is sourced, she said.

Only 23% of people said they wanted to use some sort of VR device when shopping, according to a survey of 1.200 consumers and 400 retail executives by Oracle NetSuite in partnership with Wakefield Research and retail consulting firm The Retail Doctor. They cared more about self-checkout kiosks.